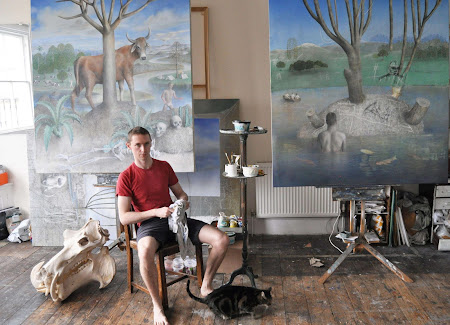 James Mortimer was born in Swindon in 1989, and studied sculpture at the Bath School of Art and Design, receiving the Kenneth Armitage Prize for sculpture. In 2018 he was selected for the Royal Academy Summer Exhibition with the bronze piece 'Crocodile Head'. His work is frequently exhibited with various gallery shows, and he lives and works in the UK.
-----Below, an interview with GQ Magazine discusses James' approach to life and work - link for original


"James Mortimer paints Renaissance worlds in a surreal landscape focusing on the theme of myth and humanity. Mortimer's take on the Renaissance is modern in the way his work interacts with the viewer. His pieces can be seen through a comedic sense as humorous undertones are revealed in the depiction of the human condition. In Mortimer's own words, he says that “humour is important in art, and I think the behaviour of the figures populating my paintings often lies in this. I like people who lack self-awareness, who do shameful, inappropriate or inexplicable things with blasé nonchalance. This is why my figures tend to look fairly unconcerned and expressionless when behaving manifestly inappropriately.”
To explore the exotic mind of Mortimer and to find out more about his obsession with Dexter's Laboratory, read on...

1. Where were you born?
The glamorous town of Swindon, in Wiltshire.

2. What did you want to be when you were growing up?
A scientist for a while. I was a fan of Dexter's Laboratory.

3. What is the best piece of advice you have ever received? What is the worst?
The best, from my grandmother: "Never lend a book. You see these books here? All these are borrowed." Joint-worst: "Art is useless. Study something sensible" and "Sleeping is a waste of time. You need 4/5 hours maximum."

4. Who is the one person, dead or alive, that you would like to have dinner with and why?
Vlad The Impaler would be interesting. It would be a tense dinner for sure but you'd probably get a good anecdote out of it.

5. Where is your favourite place on this planet?
The jungle. Any of them really, as long as there are monkeys.

6. What is your phone screensaver at the moment?
The seaside in Cornwall (my last holiday).

7. What is currently on your playlist?
Seems to be all Bach, Schubert, Mozart, Wagner, and Beethoven mixed in with the Bonzos (“Mr Apollo”), Gogol Bordello (“Not A Crime”), Gary Numan (“Cars”), The Divine Comedy (“My Lovely Horse”), Kraftwerk (“Das Model”) and Miles Davis (Kind Of Blue).

8. What are your last three Google searches?
My last three printable ones were, inexplicably, Burnham-on-Sea, brassicas and Peter Scott.

9. What gives you inspiration?
Wish I knew for certain, but I walk around a lot and that seems to work well.

10. We all love a movie night, so what is your favourite film of all time?
A cliché but it has to be A Clockwork Orange, of course.

11. What is your favourite art gallery in the world and why?
The Met in New York, for the sheer scale and quality of it. Managed to do the whole thing last year in two intensive days. The friend I was with was almost reduced to tears by the end.

12. If you could collaborate with anyone, who would it be and why?
I'm a staunch non-collaborator, but off the top of my head maybe a team-up with Gilbert & George would be fun – it could certainly end up being a fairly rude show.

13. What is your favourite sandwich filling?
I'll do anything for a bit of smoked salmon.

14. If you could visit any artist’s studio, whose would you visit and why?
Anselm Kiefer's – his studios are vast and artworks in themselves. He's also apparently bought a nuclear power plant for art (an eminently sensible thing to do), which I want to see more than anything.

15. What was the last thing you bought?
Aside from the food shopping I did earlier, I've just ordered an industrial-sized tub of brush cleaner – very rock’n’roll.

16. What is your favourite piece of clothing you own?
My favourite woolly jumper – vital for the winter months.

17. What is hanging on your walls at home?
I have a big 5x5-foot sheet of paper pinned up in my dining room, which friends and visitors have been adding to for the past year, with drafting pens provided. It's slowly turning into a very beautiful mixture of sincere art, toilet humour and inept scribbling – what art should be.

18. What is one staple item all men should own?
Other than a woolly jumper, you need a good coat that suits you.

19. What is your favourite cartoon and why?
Aside from Dexter's Laboratory, the first few seasons of Archer are masterpieces of black humour. The characters are all terrible people, which is what I like.

20. So, what is next for James Mortimer?
The next thing is the solo exhibition Land Of Mortimer, featuring new works, large and small, made over the past year (2019) "